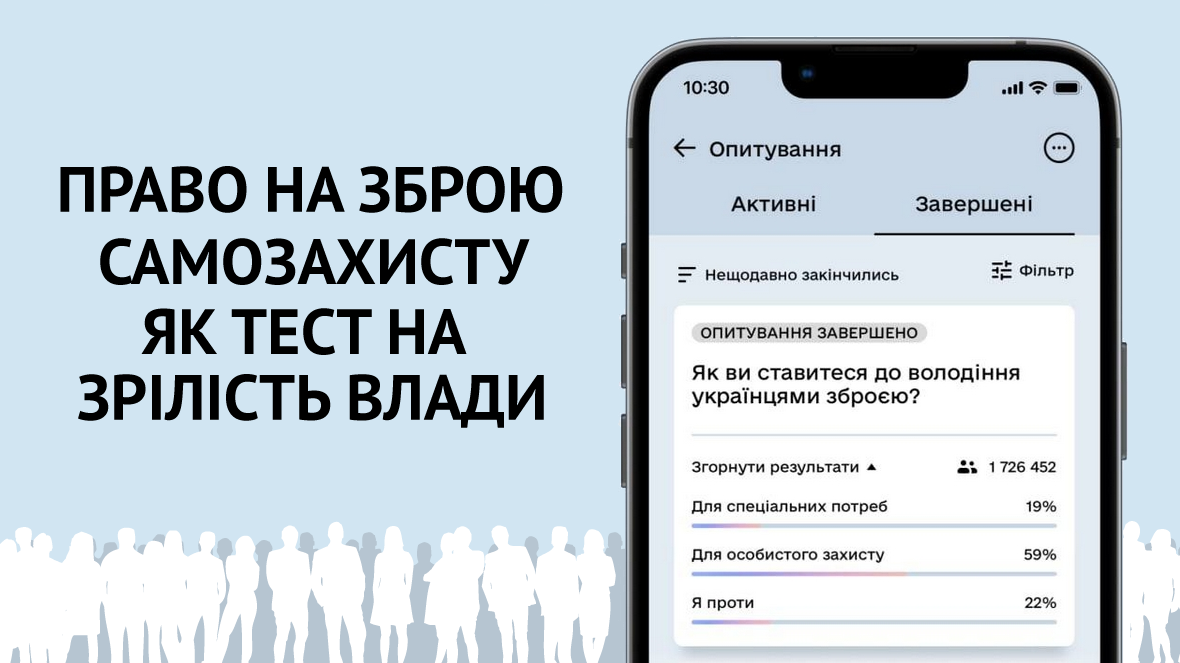 After the survey in Diya , the Minister of Internal Affairs of Ukraine Denys Monastyrskyi said that Ukrainians should have weapons for self-defense.
In the survey, which was attended by an unprecedented number of citizens – 1,726,452 people, 78% expressed their desire to obtain the right to own civilian short-barreled firearms.
At the same time, almost 59% expressed a desire to have the right to carry for personal protection. Actually, this figure corresponds to the data of a representative survey conducted by the Sociological Group “Rating” in May, according to which almost an identical number of respondents spoke in favor of granting Ukrainian citizens the right to own firearms and ammunition.

“In fact, our citizens have passed the test for possession of weapons since February 24. This is in a mass format, because tens of thousands of weapons were distributed in large cities. And it was a very big challenge for all of us,” Monastyrsky said. He expressed confidence that the parliamentarians will make appropriate changes to the draft law “On the right to civilian firearms” in the second reading.

It should be recalled that Ukraine still remained the only country in Europe that did not have a law “On Arms”, which would define what is the legal handling of weapons for civilians, what is illegal handling, as well as regulate the procedure for acquiring the right to own, use and use it. This problem, among others, was intended to be solved by the Servant of the People party, which in its election program promised to “legislate the right to own weapons”. It is worth noting that twice lawmakers tried to do this, and on February 23, 2022, on the eve of the large-scale invasion of the Russian army into the territory of Ukraine, at the second attempt, the deputies of the Verkhovna Rada managed to adopt in the first reading the draft law “On the right to civilian firearms”. Unlike the alternative draft law submitted by Andriy Sharaskin (Holos) and Marian Zablotskyi (SN) in co-authorship with a number of other MPs, which, by the way, was supported by members of the Ukrainian Gun Owners Association (hereinafter – UGOA), the draft law adopted as a basis did not mention short-barreled firearms, the right to own which was supported by 78% of Ukrainian citizens in the Action. At the time of voting, the deputies argued that the alternative bill would not get enough votes in the hall “under the dome”.

Today, after the vote in the Diya rejected the thesis about the ambiguity of the issue of possession of pistols and revolvers by civilians, it is important to bring the main draft law in line with the norms of the alternative one. Some of the amendments submitted by MP Ihor Fris (SN) are partially intended to do this, but will there be enough votes in the parliament?

The reason for writing this column was the doubts in the answer to this question among members of the UAWG, representatives of the Movement of Gun Owners “Your Voice Will Influence” and the expert community, which were caused by some theses of the Minister of Internal Affairs of Ukraine, which he expressed on the air of the national telethon. Denys Monastyrskyi, despite agreeing that it is definitely necessary to legislate the concept of gun ownership, among other things, noted that he is more inclined to keep weapons at home. This is how representatives of the mentioned communities interpreted the position of the head of the Ministry of Internal Affairs, given his words. “My personal position is that Ukrainians should have weapons to protect their own homes,” – quoting them.

It is worth noting that this is the consistent position of Denys Monastyrskyi, who, as a Member of Parliament of Ukraine, registered a bill in 2021 that allowed the storage of short-barreled firearms only at home in a safe, with use in shooting ranges and shooting ranges. Actually, this position was reflected by the answer №1 in the poll in Diia.

If before the poll in Diia the Minister could appeal to the form of ownership of short-barreled firearms that he supported, then after the poll in Diia, following the principle of “people’s power” declared by the President of Ukraine Volodymyr Zelenskyy, the Servants of the People should have implemented the will of the people unambiguously expressed in Diia, and not share their own positions. The author of these lines is inclined to believe that the parliamentarians will do so, but the statement of Denys Monastyrskyi seriously concerned the vast majority of members of the UARP, representatives of the Movement of Gun Owners “Your Voice Will Count” and the expert community, who fear that the Minister’s words are an attempt to “push through” in the second reading not those changes that are supported by the absolute majority of citizens, but the proposals of the Ministry of Internal Affairs, which are supported by only 19% of Ukrainians.

On the sidelines, which during the war expanded to the territory of the “Pechersk hills”, insiders report that such fears may not be unfounded. As of now, there is no certainty that the draft law will be properly amended for the second reading regarding the carrying of short guns for personal protection. A source from the deputy corps said that there would be an attempt to find a compromise solution in favor of owning weapons only at home and using them only in shooting ranges and shooting ranges. This is about the same as if citizens had the right to have a car, but could use it only at the racetrack, where they had to deliver their car on a carriage.

Why is such a compromise unacceptable?

First, because it does not solve the main problem that citizens would like to solve by adopting the draft law – the possibility of personal protection, protection of their life, health and property, as well as the life and health of their family and loved ones.

Secondly, because it is insignificant by definition, because it puts the state in opposition to the people, because the vast majority of citizens have already voted in the poll for the position that should be represented by their elected deputies in the parliament.

Obviously, this compromise is what those who are generally against providing citizens with self-defense weapons are ready to agree to. And, unfortunately, this list includes not only the racists who invaded our country, but also many law enforcement officers, especially those who defected to the side of the occupier, and MPs. Among the latter are not only pro-Russian politicians, but also many of those who support the caste system of society, when only the chosen ones can have weapons. Otherwise, it is difficult to understand the position of those MPs who, despite their personal possession of award weapons, do not vote for the right of citizens to purchase similar weapons for themselves.

Of course, there are those who are against weapons because of the stereotypes formed in society. In particular, they say, crime will increase and the level of threats to citizens will increase.

I would recommend these MPs to study foreign experience and conduct a real analysis of the situation in Ukraine. Experience shows that the emergence of the right to legally own self-defense weapons becomes a crime prevention. Criminals do not want to commit attacks on property, health and lives of citizens when they understand that citizens will shoot in response. According to Vadym Denysenko, Advisor to the Minister of Internal Affairs, the number of crimes in Ukraine during the war has decreased significantly. Obviously, a large number of hunting weapons in the hands of citizens, which in peacetime can not be carried in an equipped state and transported in the appropriate condition with them, as well as a large number of distributed automatic weapons, as stated by the Minister of Internal Affairs, has become a significant deterrent to the intentions of criminal attacks by various criminals.

In peacetime, citizens will not be able to carry equipped hunting weapons, and therefore will not be able to take care of their safety. Actually, they should not carry shotguns, carbines and other types of long-barreled firearms allowed today, because they are not intended for self-defense. It can inadvertently harm random citizens, because its power is enough to hit both the attacker and someone who is near or behind him. For these purposes, the entire civilized world uses pistols and revolvers, the caliber and ballistic performance of which are designed to stop the criminal, but not to cause him lethal consequences.

The study of the feeling of security and the demand of citizens to own self-defense weapons, which was conducted in February 2022 by PGR Consulting Group LLC together with Info Sapiens at the request of UIAA, showed that there are more threats to the life, health and property of citizens on the street. 85% of citizens believe that there are more criminal attacks on the street than in their own homes. Only 7% feel threatened at home. The remaining 8% could not answer this question unequivocally.

This data, even without a vote in Diya, should have put an end to the debate “where citizens should have the right to own self-defense weapons: only at home or carry them with them at all times?”

This study also showed that the argument about the perception of additional threats to citizens from the right of civilians to possess short-barreled firearms on the street is also a stereotype.

Let me emphasize once again that this is the situation before the war. At present, the figures should be much better, in favor of the growing sense of security, from the fact that law-abiding citizens have the right to own, carry and use short-barreled weapons for personal protection. It is easy to notice from the results of the May research of the Sociological Group “Rating”, according to which the most important condition today among all constitutional rights is “The right to protect one’s life”. The absolute majority of respondents chose this right – 58%. In the top three, significantly inferior in support, are “Freedom of speech” (32%) and “The right to personal inviolability” (30%), which in its essence is also a matter of personal security.

All these data are enough, if the parliamentarians want to take care of the safety of citizens, to adopt appropriate amendments to the draft law “On the right to civilian firearms” in the second reading. The demand of citizens for the right to own weapons for personal protection is absolute today. If the government follows the declared principle of democracy, then nothing should stop the idea, the time for which has come…

If this does not happen, and the stakeholders convince the hall of the need for unnecessary complex compromises, after the end of the war, the society is guaranteed to bring to political responsibility not only politicians in the walls of the Verkhovna Rada, but also personally the President of Ukraine Volodymyr Zelenskyi, more than half of whose voters support the right to own short-barreled firearms for personal protection.

We will see what decision Volodymyr Zelenskyy’s team has come to on the day of voting for the amendments that will give citizens the right to own short-barreled firearms, with the ability to carry and use them for personal protection.

Citizens have made the proper action on their part, now the action is up to the authorities!